A couple of weeks ago

toomuchfandom announced her plans to post a picture a day in February and asked if anyone wanted to join in. I had been missing my 'Christmas pretties' posts and had been considering resurrecting my picture of the day' (something I did some time a go) I said I would join in.

Thus, I shall be positing a 'February Pretty' each day. Unlike my Christmas posts, the pictures won't necessarily have a theme (although you can expect a fair few winter pictures *g*) they will just be pictures I like and want to share.

To begin my month of pretties I give you: 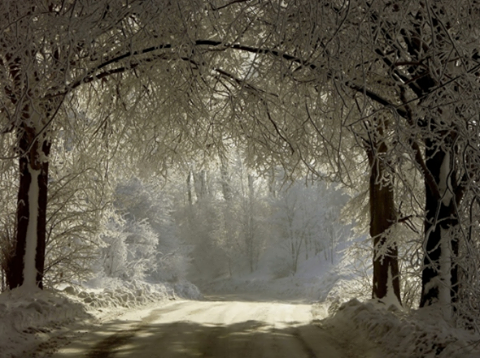 Like so many of my favourite pictures, it is a fairly simple one. I love the way the branches of the snow covered trees have come together, giving a kind of tunnel effect. I love the feel of depth in the picture and the sense of peace and pleasure it gives me to look at it. There isn't an over-abundance of snow, but there is enough to create a wonderful snowy world of snow covered, trees, bushes, the road and the landscape in general.
Collapse