For the penultimate Christmas pretty of 2019 I give you another somewhat old-fashioned, idealistic picture.

Such a lovely red front door with pretty wreaths, garlands, trees and snow - spot on. 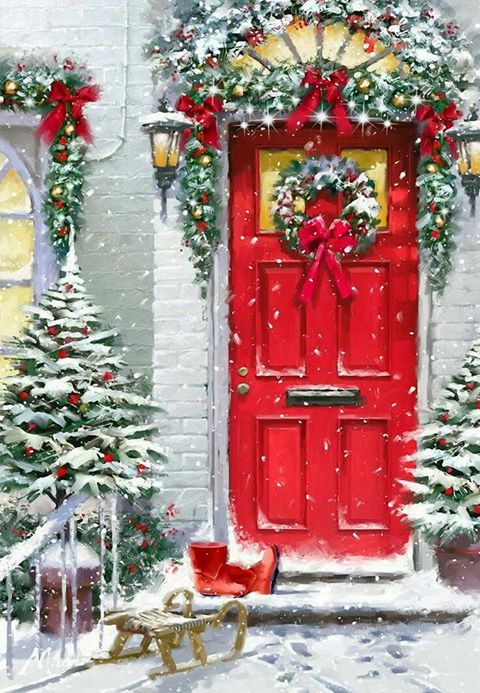 The final Christmas icon is:

This icon was made & then personalised for me by

rainbowgraphics (yet another of my favourite icon makers). I love the colours of this icon, the blues for the background and the way they make the gold shimmering Christmas tree look so lovely. The moon, partly hidden by the gold/orange horizon looks almost mysterious and other-worldly. And the fact the icon has been personalised just adds that final touch.

An English Murder by Cyril Hare 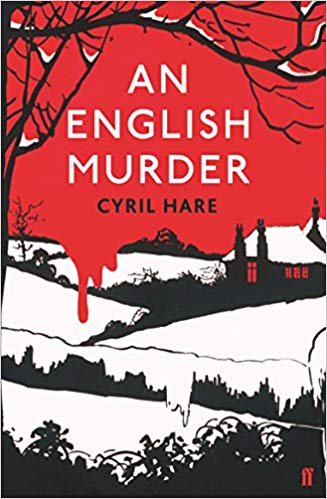 The snow is thick, the phone line is down, and no one is getting in or out of Warbeck Hall. With friends and family gathered round the fire, all should be set for a perfect Christmas, but as the bells chime midnight, a mysterious murder takes place.

Six people around the table on Christmas Eve in a large country house include the chancellor of the exchequer, the leader of a fascist movement, a Jewish historian and assorted toffs. They start dying, one by one. Snow prevents detectives from coming to investigate.

Who can be responsible? The scorned young lover? The lord's passed-over cousin? The social climbing politician's wife? The Czech history professor? The obsequious butler? And perhaps the real question is: can any of them survive long enough to tell the tale?

Written in 1951, Cyril Hare's novel tells a satisfying tale of politics and wealth, with an unexpected denouement.

This book really does have a good old-fashioned Christmas setting and the 'standard' country house murder setting, where the number of suspects are very limited.

The book was originally written in 1951 and Hare was a distinguished barrister in his other life. It's a very well written, nicely paced story, with quite a good dollop of humour (at everyone's expense) that drags you into Warbeck Hall from the off. The characters are a real mixture and I have an array of emotions about them - but whether I liked them or not, I really cared about what happened and who the killer was.

I don't want to give too much away, but the title of the book is very telling - the murder was one that could only happen in England, due to the nature of our laws pertaining to parliament and our peerage system.

I thoroughly enjoyed the book and shall definitely be seeking out more of Hare's work.

caffyolay I really think you would love this book too.
Collapse