The Cat Who Could Read Backwards, The Cat Who Ate Danish Modern and The Cat Who Turned On & Off by Lilian Jackson Braun 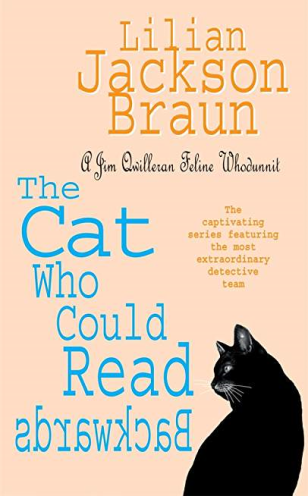 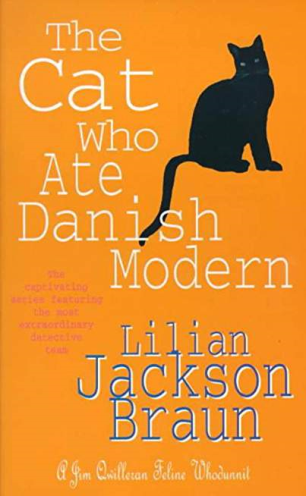 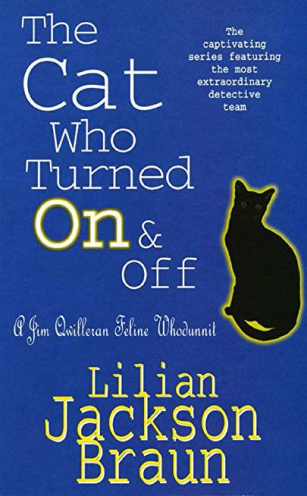 The Cat Who Could Read Backwards
The world of modern art is a mystery to many. But for Jim Qwilleran it turns into a mystery of another sort when his assignment to cover the art beat for the Daily Fluxion leads down the path to murder. A stabbing in an art gallery, vandalised paintings, a fatal fall from a scaffolding - this is not at all what Qwilleran expects when he turns his reporting talents to art. But now Qwilleran and his newly found partner, Koko the brilliant Siamese, are in their element - sniffing out clues and confounding criminals intent on mayhem and murder.

The Cat Who Ate Danish Modern
Jim Qwilleran is not exactly overwhelmed by his new assignment for the Daily Fluxion. Interior design has never been one of his specialities and now he's supposed to turn out an entire magazine on the same subject. But the first issue of Gracious Abodes is barely off the presses when Qwilleran finds himself back on more familiar territory - the exclusive residence featured on the cover has been burglaries and the lady of the house found dead...

Now Qwilleran, with the help of Koko and Yum Yum, the brilliant Siamese cats, have their respective moustache and whiskers twitching, and when Koko starts pawing clues in the dictionary and sniffing designer furniture, Qwilleran finds himself doing a feature on a very clever murderer.

The Cat Who Turned On & Off
Jim Qwilleran's latest commission is a piece on Junktown - a ghetto of antique dealers and collectors living in genteel decay. Enchanted by Junktown and its delightfully bohemian inhabitants, Qwill finds himself digs in the area, renting two rooms to share with his sleuthing Siamese companions Koko and Yum Yum. When his landlord C.C. Cobb, one of Junktown's leading citizens, falls mysteriously to his death, Qwill's famous whiskers begin to twitch. It's only when Koko develops a passion for tape-recorders, to rival even that of his journalist mentor, that the vital clues begin to drop into place...

I used the cover of the first book the other week for my 'weekly book cover' meme and to my surprise and pleasure discovered several people who had also enjoyed the books. Thus with them on my mind, I decided to embark on a reread of them, it being some fifteen years (at least) since I last read them. This time though I won't read all twenty-nine back-to-back, I'll intersperse other books with them.

They are cosy mysteries involving a newspaper writer and two Siamese cats. I'm not a cat lover and yet I do love these books. LJB is a fine writer and tells the stories very well. You learn more and more about Qwill as the books go on and his character develops, as does the characters of Koko and YumYum, as well as various recurring characters both from Qwill's past and from his present. And there are mentions of the unusual spelling of Qwill's surname.

Qwill is a great character, he has his faults as well as his excellent points, he's the kind of chap you'd want around in an emergency and the kind of chap you know you could rely on. His moustache and Koko's whiskers & word finding play their part in solving the mysteries and LJB writes them in a completely believable way.

The books pretty much do what they say on the tin. They are feel good, cosy mysteries, where murders happen off-screen and there aren't pages of sex and violence. They have humour, excellent character interaction, interesting friendships & the odd touch of romance. They are an easy, quick read, well paced, nice and crisp and you often end up learning new things - even if it is only the meaning of words Koko turns up. They have a real 'feel good factor' about them.

These are the first three books in the series, they were all written in the 1960s, but they have aged well, very well in fact. I thoroughly enjoyed the first three books and if you like cosy mysteries with a bit of a twist, with good characters and settings, then I'd definitely recommend them. I'm looking forward to reading the other twenty-six throughout the year.
Collapse