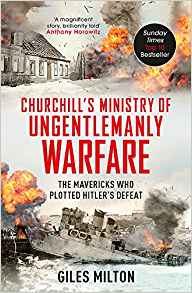 Six gentlemen, one goal - the destruction of Hitler's war machine

In the spring of 1939, a top secret organisation was founded in London: its purpose was to plot the destruction of Hitler's war machine through spectacular acts of sabotage.

The guerrilla campaign that followed was to prove every bit as extraordinary as the six gentlemen who directed it. Winston Churchill selected them because they were wildly creative and thoroughly ungentlemanly. One of them, Cecil Clarke, was a maverick engineer who had spent the 1930s inventing futuristic caravans. Now, his talents were put to more devious use: he built the dirty bomb used to assassinate Hitler's favourite, Reinhard Heydrich. Another member of the team, William Fairbairn, was a portly pensioner with an unusual passion: he was the world's leading expert in silent killing. He was hired to train the guerrillas being parachuted behind enemy lines.

Led by dapper Scotsman Colin Gubbins, these men - along with three others - formed a secret inner circle that planned the most audacious sabotage attacks of the Second World War. Winston Churchill called it his Ministry of Ungentlemanly Warfare. The six 'ministers', aided by a group of formidable ladies, were so effective that they single-handedly changed the course of the war.

Told with Giles Milton's trademark verve and eye for detail, Churchill's Ministry of Ungentlemanly Warfare is thoroughly researched and based on hitherto unknown archival material. It is a gripping and vivid narrative of adventure and derring-do and is also, perhaps, the last great untold story of the Second World War.

I don't read a large amount of non-fiction books, I do prefer fiction. However, J read this and recommend it highly so I thought I'd give it a go and I'm very glad I did.

The title basically sums the book up perfectly, 'it does what it says on the tin'. I first came across the kind of people who worked for this organisation in an episode of Foyle's War which touched on the subject briefly and expanded a little more in the final series. J knew more about it before that through other things he had read.

The books shows how this secret group came together and how they devised some wondrous, novel and amazing things, that really did play a huge part in the defeat of Hitler and showed their part in how the allies won the war. It showed how actually a small team of knowledgeable saboteurs were actually more effective than carpet bombing when it came to destroying factories vital to the German war machine.

The group wasn't liked by many, especially by those who had served in previous wars, because the work was considered to be 'ungentlemanly' and not the sort of thing the British should be doing. And yes, some of things they did, do seem harsh, shocking even and very ungentlemanly - but there isn't anything gentlemanly about war.

Despite the subject matter the book isn't heavy going and devoid of humour or light-heartedness, more than once a turn of phrase or the description of something or a conversation actually had me chuckling or at least smiling. It wasn't a 'heavy tome' and it was very well written with a light, human touch. The people involved were real people and came across as being real, as people you would know, get on with, like, etc. They had families, likes, dislikes, loves, they were human beings - they just had the ability not that many people have to let their minds go to weird and wonderful places and to have the nerve and the belief and patriotism to do what they did - in many cases that meant giving their lives.

It was actually a very enjoyable read as well as a gripping and informative one that had me marvelling at the audacity, brilliance and bravery of the chaps and girls involved. Given the blurb about the books implies this style is common to the writer, I might well have a look at what else he has written. If you have an interest in this kind of book I would recommend it and if you have a Kindle it's extremely well priced at the moment.
Collapse