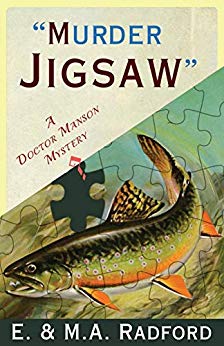 “Jiminy! He’s going to fish for him.”

A small Cornish fishing hotel, The Tremarden Arms, is renowned for its adjacent waters where guests fish for salmon and trout. The unpleasant Colonel Donoughmore is found drowned in a salmon pool in the hotel grounds. He was dressed for fishing and his rod was on the bank nearby. The local Police concluded it was an unfortunate accident but Doctor Manson finds two peculiar circumstances which convinced him that this was a skilfully contrived murder. There were fellow fishermen out on the river banks near to where the Colonel was found dead, two of whom had publicly uttered threats against him. Furthermore, several other hotel guests had strong financial motives for removing him.

This book was originally published in 1994 and unlike many books older books, I felt it really did show its age in terms of writing.

It's a good story, an enticing puzzle and it has an intriguing lead detective, who also happens to be excellent at forensics too. The other characters are well written and whilst some are very much of 'a type' that isn't an issue.

Also parts of the book were completely unintelligible due to the practice back then of writing in dialect. At one point a Cornish chap and a Scottish chap were having a conversation and I honestly couldn't follow it. I got odd bits, but most of it was just gibberish - thankfully the salient points of the conversation did get relayed shortly afterwards in non-dialect English.

I'm not a fisherman nor have I any interest in the subject, but I didn't feel completely out of my depth - no more so than I do with any other hobby/lifestyle, etc. for which I have no real interest or knowledge. That said, maybe I would have enjoyed the book more had I understand the details about fishing.

It wasn't an awful book (I read on to the end) it did keep me guessing and I guessed wrongly as to whodunnit, I did like Manson and his side-kick. But I wouldn't recommend it and I won't be seeking out the other couple of books by the same authors which have been reprinted, although I have just discovered J has bought them on Kindle. It's probably my most disappointing read so far this year.
Collapse