Valencia and Valentine by Suzy Krause 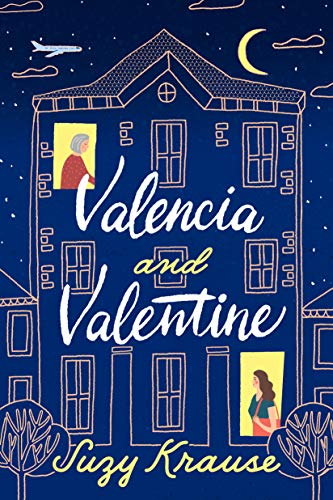 Valencia, a timid debt collector with crippling OCD, is afraid of many things, but the two that scare her most are flying and turning thirty-five. To confront those fears, Valencia’s therapist suggests that she fly somewhere—anywhere—before her upcoming birthday. And as Valencia begins a telephone romance with a man from New York, she suddenly has a destination in mind. There’s only one problem—he might not actually exist.

Mrs. Valentine is an eccentric old woman desperate for company, be it from neighbours, telemarketers, or even the funeral director (when you’re her age, you go to a lot of funerals). So she’s thrilled when the new cleaning girl provides a listening ear for her life’s story—a tale of storybook love and incredible adventures around the world with her husband before his mysterious and sudden disappearance.

The stories of Valencia and Mrs. Valentine may at first appear to have nothing in common . . . But then again, nothing in life is as straightforward as it seems.

I choose this book from this months' Amazon Prime's 'First Reads' because it looked somewhat intriguing (and quite frankly looked the best of the books on offer). Also, I am aware I have OCD to a small degree, so I thought it would be interesting to read the book.

For a first book I thought it was very well written, flowed really well, clipped along a good pace that was neither too quick nor too slow and kept me intrigued throughout. The characters were good and believable, the setting was fine, the switching back and forth between Valencia and Mrs. Valentine was done extremely well and given it's not something I'm a huge fan of, I doff my cap to SK for how well she did it. Never once did I get lost or confused as to which character I was with. The OCD element of the book again I thought was really well done, it was always there, but it wasn't overplayed or overdone, again SK did an excellent job.

In short everything worked; it was very readable - in fact it delivered pretty much everything one can ask for in a book. However, whilst I liked the book, I didn't love it and I don't think it will be a re-read book (although were it a 'real' book as opposed to an ebook, I wouldn't be parting with it as I would if I knew the book was definitely a non-re-read). I shall definitely be keeping an eye out for anything else Suzy Krause might write.

There's a 'twist' a surprise, whatever you want to call it at the end, which I guessed at some point whilst reading the book. I actually don't know when I guessed it, it may have been from the beginning, it may have been halfway through, it may have been towards the end. It was that kind of 'twist', you realise you know what it is, but can't necessarily say when you realised it or what gave it away - if anything did. That fact adds, in my mind, to the skill of the writer.

It was a satisfying, enjoyable read. It wasn't a really light book, nor was it a heavy book, it was well balanced. I wasn't disappointed by it; I wasn't wowed by it - but then it would be awfully tiring if one was wowed by every book one read, wouldn't it?
Collapse