Head in the Sand, Kickback and Swansong by Damien Boyd 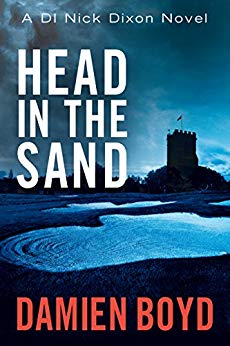 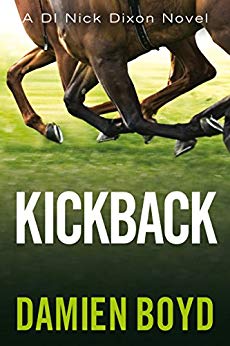 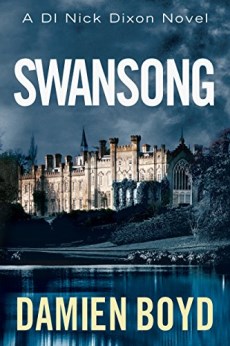 Head in the Sand
The discovery of a severed head in a golf course bunker triggers a frantic race to find a serial killer that brings the town of Burnham-on-Sea to a standstill.

A connection is made with a series of unsolved murders harking back to the 1970s, and Detective Inspector Nick Dixon finds himself caught in a race against time that takes him the length and breadth of the country.

The brutal killing of an elderly man raises the stakes and, as he closes in, Dixon begins to question whether he is chasing one serial killer or two.

Kickback
A trainee jockey has been kicked to death by an aggressive stallion at the local stables. Deemed an accidental death, the case is closed. But when the jockey’s brother returns from active service, he sparks an armed siege, demanding the investigation be re-opened and the truth uncovered.

Still recovering from the physical and mental scars of his last case, Detective Inspector Nick Dixon is dragged deep into a murky world of betting scams and murder, where people will do anything to keep their secrets. Even if that means silencing a DI who keeps asking the wrong questions about the wrong dead jockey...

Swansong
Isobel Swan, a sixth form student, has been murdered. First, her ring finger is severed, then her throat is cut.

But to find the killer, he must first confront his inner demons and lay to rest the ghosts lurking in his own past. If he can…

As Dixon digs deeper, the stakes have never been higher and a murder has never felt so personal.

I am so glad I came across this series because I am completely hooked now - I had to stop myself from going straight onto the next book (which I may already have on my Kindle *g*).

Nick Dixon is a great character, very human, very real, very believable  - I would feel very secure if he was investigating a case for me. He cares deeply about people and the cases he investigates, but the writer doesn't feel he has to tell us this fact every second paragraph or so. In fact one of the reasons I am enjoying this series so much is that it's written in what I guess you would call 'old school' style, i.e. no wasted words, no overly long descriptions, no OTT internal angst, no waffle, no padding. I like the author's style very much indeed and you can tell he knows his stuff, not just from reading books and using his imagination, but from his years as a criminal solicitor.

And it isn't just Nick who is such a good, well drawn character, it's all the characters. Boyd writes them all very well, from the other detectives and other people involved in crime solving, to those involved in the case as witnesses, or suspects, or potential suspects, etc. Boyd clearly knows people and writes them well - albeit in a sparse(ish) way.

Because of the non-padding and waffle style, we don't know every single fact about Nick's life, in fact it would be easy to assume we know barely anything about him. That's mainly because what we do learn about him, is done in a simple way; the odd line here, a comment, by his actions, by the way he talks about things and at times you're not necessarily aware you have learnt something about his character. Actually, I feel I know an awful lot about him and have learnt most of it from small things and throw-away lines or references.

It's not just with the characters that Boyd does a grand job, he does it as well with the setting. The reader gets a real feel for the part of Somerset in which Nick works, but again without pages and pages of description. We do get description, but it's woven into the story in an excellent way.

The second book in the series Head in the Sand is very good and already a step up from the first book and upon finishing it I immediately bought the third book. And it was with the third book, Kickback that I was completely hooked and where the author really honed his writing skills and got into his stride.

I admit when I read the blurb for Swansong, I was somewhat concerned that the author was going the way of so many modern writers and he would move totally away from the character he had built and have Nick wailing and going through page upon page upon page of introspection and emotional angst due to 'his pasts'. I was relieved when that didn't happen. Yes, the past was there, yes, it was mentioned a reasonable amount, yes, Nick remembered, yes, it had an impact, but not in the way where it changed his character and completely overtook the story.

I really, really like this series and I do hope the books continue to be as good, as non-padded and as fast-paced and enjoyable and with such good, well written, well designed, completely believable characters, a lovely setting and really interesting crimes that keep you guessing and are well balanced.
Collapse