The Skull Beneath the Skin by P. D. James 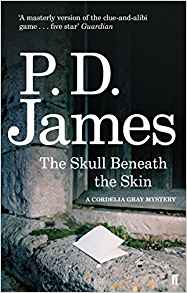 Clarissa Lisle hopes to make a spectacular comeback in a production of The Duchess of Malfi, to be played in Ambrose Gorringe's sinister castle at Courcy Island. Cordelia is engaged by Sir George Ralston, a baronet, World War II hero and husband of Clarissa, to accompany his wife to Courcy Island in the guise as a secretary-companion. Clarissa has been receiving thinly veiled death threats in form of quotations from plays where she played the main role.

But it soon becomes clear that everyone on the island is in danger. Trapped within the walls of the Gothic castle, the treacherous past of the island re-emerges, and everyone seems to have a motive for sending Clarissa 'down, down to hell'.

Shortly before the performance of The Duchess of Malfi, Clarissa is brutally murdered, leaving Cordelia and the Dorset CID to deal with solving the crime.

I had already decided I would read the second Cordelia Gray novel once I had finished the Book Bingo challenge. It's been quite a few years since I last read it and in truth I had forgotten a) what a superb writer P. D. James is and b) what a good book this is. It was first published in 1982, ten years after the first Cordelia Gray book (An Unsuitable Job for a Woman). However, it takes place only a short time after the previous case.

Cordelia is still running the private detection agency and even has a couple of semi-regular members of staff: a lady in her 60s who does the typing and assists with finding lots pets - which make up a fairly large part of Cordelia's 'detecting' and a long out-of-work actor. Amazingly and bemusingly (especially to Cordelia) these two diverse characters get on really well. Cordelia is very fond of both of them and knows that really if it wasn't for her, neither of them would be in any kind of regular work. Just as she is again wondering how long she can keep the agency open for, Clarissa Lisle's husband turns up and offers a job; she accepts and off she goes to Courcy Island where things go from bad to worse and she nearly loses her life.

In many ways the story is akin to the 'cut-off country house mysteries' because it is set on an island where there is only a limited number of people/suspects. However, it is rather darker than the 'cut-off country house mysteries' as the past rears its head for more than one of the characters and becomes entwined with the present and the endgame is death. At one point even Cordelia is under suspicion, but somewhat to the annoyance of the DI in charge of the case she is completely exonerated thanks to a character reference courtesy of Adam Dalgliesh. Unlike the previous book, Dalgliesh isn't mentioned regularly; his name only pops up a couple of times.

All of the characters are very well written and very real, no matter if they have a large part or a small, Ms. James brings them all to life. None of them are out and out likeable, all of them have a past and all of them have something to gain. The setting is excellent and you really do feel you are on the island and as the book goes on and things get darker, you do feel you are cut off from the mainland.

It's a longer book than the first book, but it isn't a padded book, everything that is in it, is there for a reason. It's an excellent read and as the story enfolds and the book moves on, it becomes harder to put down. I think it maybe raises a few questions as far as how orthodox, how believable, how likely, how 'real', it is, but then one has to say that about an awful lot of crime books - even police procedural ones. Nonetheless that doesn't, for me, detract in the slightest from the fact it is an absorbing story, very well paced and extremely well written.
Collapse