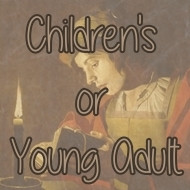 To be honest I hadn't consciously realised this series was considered 'Young Adult'. Thus, I was rather pleased when I discovered it fitted this category as I hadn't read the last book in the series.

The Shepherd's Crown by Terry Pratchett 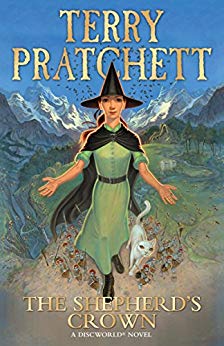 A shivering of worlds.

Deep in the Chalk, something is stirring. The owls and the foxes can sense it, and Tiffany Aching feels it in her boots. An old enemy is gathering strength.

This is a time of endings and beginnings, old friends and new, a blurring of edges and a shifting of power. Now Tiffany stands between the light and the dark, the good and the bad.

As the fairy horde prepares for invasion, Tiffany must summon all the witches to stand with her. To protect the land. Her land.

The last ever book by the late, great Sir Terry Pratchett, which makes it more than a little poignant and definitely bitter sweet.

The Tiffany Aching series is an excellent and very enjoyable series and this book was no exception. Tiffany is a lovely, fun, very real character and her world is both simple and complex and believable. The other characters, both recurring and new, are all well written, some are good, some are bad, some are somewhere in-between; all play their part well in this conclusion to the series.

As the blurb says 'this is a time of endings and beginnings' and the book was indeed that. We lose a long and much loved character which in effect is the end of an era - which is somewhat spooky given it was Sir Terry's last book it is indeed the end of an era and a world in effect.

It was an excellent, enjoyable read; a book that flowed well and was interesting from beginning to end, well balanced in pace and as always extremely well written. If you like the Tiffany series, I'm sure you'll enjoy this book; if you've never given the series a go, but like Sir Terry's other books, then I think you'd enjoy this series.
Collapse