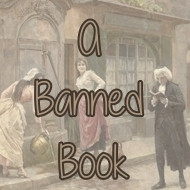 It took some time, but I did finally decide on a banned book. More than one person suggested this particular book. 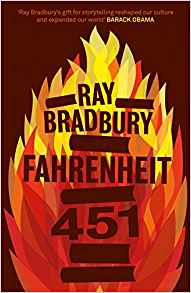 The hauntingly prophetic classic novel set in a not-too-distant future where books are burned by a special task force of firemen.

Guy Montag is a fireman. His job is to burn books, which are forbidden, being the source of all discord and unhappiness. Even so, Montag is unhappy; there is discord in his marriage. Are books hidden in his house? The Mechanical Hound of the Fire Department, armed with a lethal hypodermic, escorted by helicopters, is ready to track down those dissidents who defy society to preserve and read books.

The classic novel of a post-literate future, 'Fahrenheit 451' stands alongside Orwell's '1984' and Huxley's 'Brave New World' as a prophetic account of Western civilization's enslavement by the media, drugs and conformity.

Bradbury's powerful and poetic prose combines with uncanny insight into the potential of technology to create a novel which over fifty years from first publication, still has the power to dazzle and shock.

This has to be one of the most powerful, gripping, intense and scary books I have ever read. Bradbury knows exactly how to use words and he doesn't waste a single one. His descriptions and language are evocative, powerful, intense and very readable. It is also quite a tough read because of the fact he doesn't waste words, thus there's no 'down moments', it's full on from beginning to end.

It's also tough because more than once I found myself thinking 'this could really happen today'. The whole 'one no longer thinks for oneself but has to think the way others tell one too' and not really  having conversations with one another, etc. etc. Given when it was first written, it's somewhat spookily scary.

Did I enjoy it? I don't think it's a book one 'enjoys'. It's a book I am jolly glad I have read and a book I would seriously recommend most highly. If you're doing the

ljbookbingo challenge and looking for a banned book, then you could do far worse than give it a go. However, even if you aren't doing the challenge I'd still say 'give it go'. For a book I can't say I 'enjoyed' I cannot recommend it highly enough. Oddly enough, despite how highly I recommend it, I don't see myself reading it again. I shall, however, try some of Bradbury's other books. I know we have Something Wicked This Way Comes.
Collapse