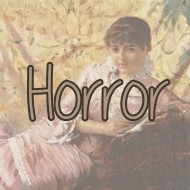 Horror was a category I considered substituted/using a wild card for as it isn't a genre I tend to read. However, I was determined to find something (other than falling back on Dracula) and after a fair bit of hunting stumbled across this author and this book. The book could also have qualified 'Chosen for Cover' as the cover was the first thing that caught my eye and it could have qualified for 'new to me author' (I do like to find multi-category books *g*) 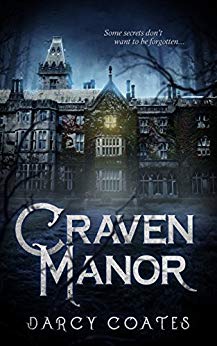 Daniel is desperate for a job. When someone slides a note under his door offering him the groundskeeper’s position at an old estate, it seems too good to be true.

Alarm bells start ringing when he arrives at Craven Manor. The mansion’s front door hangs open, and leaves and cobwebs coat the marble foyer. It’s clear no one has lived there in a long time.

But an envelope waits for him inside the doorway. It contains money, and promises more.

Daniel is desperate. Against his better judgement, he moves into the groundskeeper’s cottage behind the crypt. He’s determined to ignore the strange occurrences that plague the estate.

This book was somewhat strange for me insofar as I was still in two-minds as to whether I wanted to continue with it or not when I had finished the sample (normally I know within a few paragraphs). I had decided if it was nice and cheap I'd buy it, but then found in fact I could borrow it under my Amazon Prime membership, so that made up my mind. I'm glad I did.

The writing style is good, enjoyable and engaging. It's well written and fairly fast-paced, but not overly so - you don't end up exhausted. There isn't anything really superfluous in the book; the characters are well-rounded, believable and real - and there is a limited number of them, so you don't end up getting lost. You get to know them, but not in a way whereby you are over-whelmed by information.

The horror is, I guess you'd call it, safe and gentle horror. It's an entertaining and solid haunted house horror story, but it isn't the kind that will keep you awake or needing to sleep with the light on. Although there were definitely moments of fear and trepidation and tingling moments. There is also a mystery element in it, insofar as you don't know if the person who engages Daniel is a goodie or a baddie. Also Daniel ends up having to make the kind of choice most of us would rather not be faced with. It keeps you guessing and certainly kept my attention and I found it hard to put down.

I really enjoyed the book and shall definitely have a look at some of the author's other books. If you like a more gentle horror story with a mystery then I'd definitely recommend this book. However, if you like your horror darker and grisly and 'sleep with the light on', then I don't think you'd enjoy this. That said of course one person's idea of 'horror' is someone else's idea of a 'gentle Sunday afternoon meander'.
Collapse