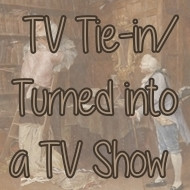 Ironically, despite the Wexford series coming before the TV series, it was through the TV series 'The Ruth Rendell Mysteries' starring George Baker as Wexford and Christopher Ravenscroft as Mike Burden that I came across Ruth Rendell and Wexford.

From Doon with Death by Ruth Rendell 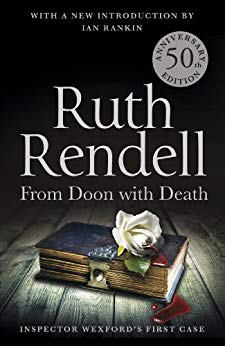 An ordinary life. An extraordinary death.

The trampled grass led to the body of Margaret Parsons.

With no useful clues and a victim known only for her mundane life, Chief Inspector Wexford is baffled until he discovers Margaret's dark secret - a collection of rare books, each inscribed from a secret lover and signed only as 'Doon'.

Who is Doon? And could the answer hold the key to Wexford solving his first case?

This is the first of twenty-four Wexford books and Ruth Rendell's debut novel. I first read this book many years ago when I had most of the Wexford books and decided that as it would fit nicely into the 'TV Tie-In' category, it was time I revised Wexford to see if I enjoyed the books as much as I had done in the past. I can categorically say that I enjoyed this book very much indeed and shall be getting more of the books on Kindle in due course.

The book was originally published in 1964 and couldn't be set in today's world, because the whole thing relies on the fact that the vast majority of women back then were housewives. There are additions reasons why it couldn't be set today, but I don't want to give the plot away too much.

George Wexford is a solid policeman of his time. Somewhat interestingly I think his TV character is slightly more likeable than the book version; not that I disliked his book character, not at all, and his sidekick (Mike Burden) is also a nice character too and they work well together. In some ways, although Burden is the younger character he is somewhat more old-fashioned (even for the time) in his views and life-style than Wexford is.

The style is also of its time insofar as we don't have major angsts and lots of introspection and things taking away from the case. There is some outside stuff but the balance to my mind is excellent; it's drip fed and mentioned in passing rather than being the focus. The focus is the case; that's what, in my mind, a detective story is about. Somewhat interestingly I actually remembered who the murderer was, which is actually a rare thing for me as I don't tend to remember murderers.

If you are looking for a good old-fashioned style detective story and are happy to accept that the book was written and set in the '60s and thus will seem somewhat 'odd' in today's world, then I'd recommend the book highly. If you prefer more angst and introspection and can't imagine life back in the '60s, then I don't think this would be the book for you.
Collapse