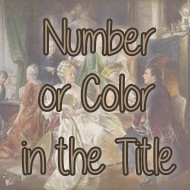 This is another book which could have fitted into multiple categories. I went with 'Number in the title' as books with either a number of colour in the title aren't as common than books for the other categories into which it would fit are. 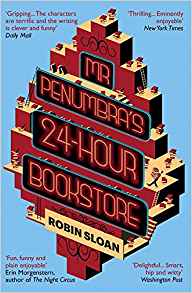 Recession has shuffled Clay Jannon out of his life as a Web-design drone and serendipity coupled with sheer curiosity has landed him a new job working the night shift at Mr. Penumbra's 24-Hour Bookstore. And it doesn't take long for Clay to realize that the quiet, dusty book emporium is even more curious than the name suggests. There are only a few fanatically committed customers, but they never seem to actually buy anything, instead they simply borrow impossibly obscure volumes perched on dangerously high shelves, all according to some elaborate arrangement with the eccentric proprietor. The store must be a front for something larger, Clay concludes, and soon he has plugged in his laptop, roped in his friends (and a cute girl who works for Google) and embarked on a high-tech analysis of the customers' behaviour. What they discover is an ancient secret that can only be solved by modern means, and a global-conspiracy guarded by Mr. Penumbra himself... who has mysteriously disappeared.

I came across this books thanks to

caffyolay who mentioned that she had bought it at the same time as a crime book we had both bought for our Kindles. Partly because Caffy and I do have quite a few common tastes in books and also because of the number and also because it was about books and bookshops I thought I'd go and have a look at it. The synopsis sounded intriguing and I thought I'd give it a go.

Having read it I'm still not sure quite what kind of book I'd classify it as, other than a book I really enjoyed reading. It's not my normal type of book (if I have one) but I found it fun read. The characters were all good and engaging, it was well written, the mystery element was intriguing and it kept me guessing and I was surprised when I found out what the 'mystery' was. And although it was fantasy, I guess, it was believable.

It was a well balanced book as you had on the one hand the 'old' with the bookstore and 'real' books and the elderly Mr. Penumbra and on the other hand the high-tech world of Google and web-design, etc. You also had the young and the elderly,  the wealthy and those struggling, male and female, you had mystery and a hint of romance and lots of friendship. I suspect it was aimed at people younger than me, probably people more of Clay's age. However, I didn't find that a problem - unlike some books which if aimed at a particular age sometimes simply don't 'work' for people who aren't of that age.

It did all I ask of from a book: it provided a good plot that kept me engaged and intrigued and was very enjoyable.
Collapse