I saw this on

birggitt's journal (and more recently on

gilda_elise's) and after mulling it over decided I would give it a go. The comm is

ljbookbingo and the premise is to read 25 books during 2019, thus ticking off each square, until you have bingo'd out. 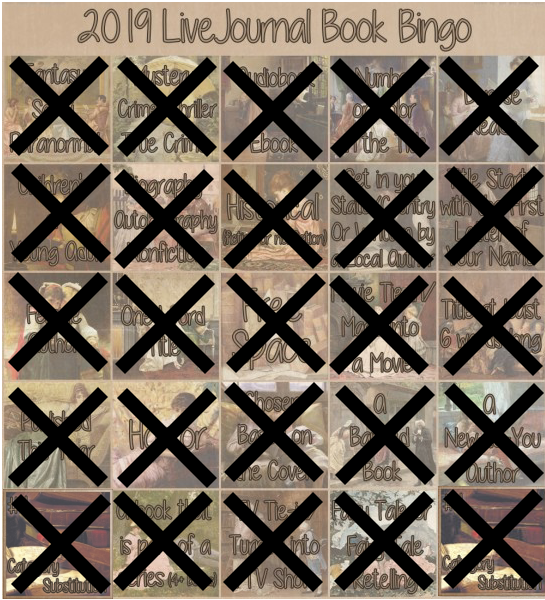 CATEGORIES:
Fantasy/Sci-Fi/Paranormal - Demon Devine by John Conroe
Mystery/Crime/True Crime - Plain Murder by C. S. Forester
Audiobook or Ebook - From the Depths and Other Strange Tales - Edited by Mike Ashley
Number or Colour in the Title - Mr. Penumbra's 24-Hour Bookstore by Robin Sloan
Diverse Reads - Against the Odds by Dick Francis

Children's or YA - The Shepherd's Crown by Terry Pratchett
Biography/Autobiography/Nonfiction - Tennis's Strangest Matches by Peter Seddon
Historical (fiction or nonfiction) - Fire in the Thatch by E. C. R. Lorac
Set in Your State/Country or Written by a Local Author - Northumberland Folk Tales by Malcolm Green
Title Starts with the First Letter of Your Name - Swimming Pool Sunday by Madeline Wickham

Female Author - Aoife's Chariot by Katherine Pathak
One Word Title - Waxwork by Peter Lovesey
Free Space - The Midwich Cuckoos by John Wyndham
Movie Tie-in/Made into a Movie - Death in Captivity by Michael Gilbert
Title is at Least Six Words Long - An Unsuitable Job for a Woman by P. D. James

Comic or Graphic Novel Category Substitution: Animal on the Cover - Lost Dogs and Lonely Hearts by Lucy Dillon
A Book that is Part of a Series (4+ books) -As the Crow Flies by Damion Boyd
TV Tie in/Turned into TV Show - From Doon with Death by Ruth Rendell
Fairy Tale or Fairy Tale Retelling - A Crown of Snow and Ice by Melanie Cellier
Cookbook or Food Memoir Category Substitution: Short Story Collection - Parker Pyne Investigates by Agatha Christie

The Category Substitutions List:
1. Romance
2. Less than 200 pages long
3. A book that won an award
4. Spin-off or shared universe
5. First person POV
6. A Classic
7. An anthology of short stories
8. A book that features a character with a disability
9. An author's debut novel
10. Set in the future
11. Animal on the cover
12. 100k+ word fanfic
Collapse