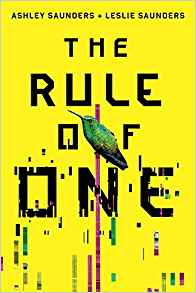 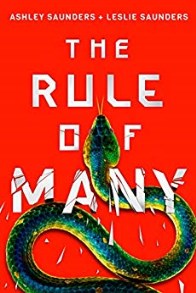 The Rule of One
In the near-future United States, a one-child policy is ruthlessly enforced. Everyone follows the Rule of One. But Ava Goodwin, daughter of the head of the Texas Family Planning Division, has a secret—one her mother died to keep and her father has helped to hide for her entire life.

She has an identical twin sister, Mira.

For eighteen years Ava and Mira have lived as one, trading places day after day, maintaining an interchangeable existence down to the most telling detail. But when their charade is exposed, their worst nightmare begins. Now they must leave behind the father they love and fight for their lives.

Branded as traitors, hunted as fugitives, and pushed to discover just how far they’ll go in order to stay alive, Ava and Mira rush headlong into a terrifying unknown.

The Rule of Many
Born to a death sentence in a near-future America, rebellious sisters herald a revolution—if they can survive.

Twins Ava and Mira Goodwin defy the Rule of One simply by existing. The single-child law, ruthlessly enforced by Texas’s Governor Roth, has made the sisters famous fugitives and inspirations for the resurgent rebellion known as the Common.

But the relentless governor and his implacable Texas State Guard threaten that fragile hope, as Roth consolidates his power in a bid for ultimate authority.

As Ava and Mira relinquish the relative safety of their Canadian haven to stand against Roth, new allies arise: Owen, a gifted young programmer, impulsively abandons his comfortable life in a moment of compassion, while Zee, an abused labor camp escapee, finds new purpose in resistance.

The four will converge on Dallas for a reckoning with Roth, with nothing less than their destinies—and the promise of a future free from oppression—on the line.

Disobedience means death. But a life worth living demands rebellion.

I've never really been interested in reading dystopian books as they seem too dark, depressing and unrealistic. However, The Rule of One popped up on my Kindle through advertising and something about the title and/or cover caught my eye - I didn't know it was a dystopian novel at that point. I read the blurb and it still seemed interesting, after all it hasn't been that long since China had a one-child policy, so the set-up was believable, thus I was going to try a sample when I discovered I could borrow it through Prime, so I did.

It's written by twin sisters (which must be an extremely clever marketing tool and I admit did add to my interest in the books). The first book swaps back and forth between them a chapter at a time as they tell their part of the story in the first person. I was drawn into the story and into their world and their dilemma and found it well paced, well told, well written and actually scarily believable. Their world in general was well drawn and despite not living in America, I could believe in how things had become as they had.

I finished the first book and at that time I didn't know there was a second book (and apparently a third is being written) and although things hadn't been resolved, I would actually have been happy to have left it there. However, curiosity and that fact I had enjoyed the book drove me to find the second book which I discovered I could also borrow; so I did.

Once again it's told in the first person, but as well as the twins writing as 'their' respective twin, two other characters also have their first person characters - I'm assuming each twin took one of the two characters. Again it was well written, well paced, well told and very scarily believable. However, as the story went on, I'm afraid I lost all the compassion and most the sympathy I had for Ava and Mira as their characters changed and they became as 'bad' as those they were seeking to bring down.

Yes, of course on one level I could totally understand from where they were coming; grave injustices had been done to them and others. However, they to my mind became so blood-thirsty, so dark, so unpleasant, so uncaring about anything but getting their revenge, no matter what the cost to anyone, that I came do really dislike them. By the end of book I honestly didn't care if they 'won' or the other side did - in fact on a couple of occasions I was rooting for the other side. I didn't even care if they lived or died.

I haven't read reviews of the books, so I don't now if this is just me; it probably was just me and maybe I just read it at 'the wrong time'. Maybe the authors even wanted the reader to have that reaction - but if would surprise me if they had.

The second book was also for me a lot darker and far more depressing than the first. The first managed to fit in some lightness and even humour and affection and hope. The second book was devoid of all of that and definitely reminded me why I don't care for dystopian books. It offered nothing but negativeness.

The third book isn't out yet and as it stands I almost certainly won't be reading it. That said, whilst I didn't care about the twins in the second book and what happened to them, I was somewhat interested in a couple of the other characters. Plus, I'm a completist and as such part of me will want to read it. Although as it's not out yet (I don't think it's even fully written yet) I might well have forgotten about it by the time it comes out.

I'm afraid I can't recommend these books. That said of course, we are all different, we all like and dislike different things and someone who enjoys dystopian stories might well enjoy these books.
Tags: books, books: 2019, books: reviews 2019
Subscribe